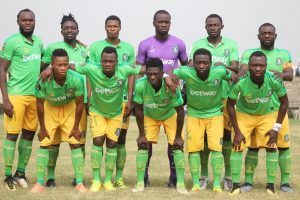 Aduana Stars, Ghana’s representatives in the CAF Confederation Cup, were given a surprise USD 25, 000 bonus package from the club’s owner and Dormaahene Osagyefo Oseadeyo Agyemang Badu II, on Monday.

The amount was given as a reward for the team’s performances in terms of continental football in since February this year in the CAF Champions League qualifiers and the group stages of the CAF Confederation Cup.

Aduana Stars dropped into the Confed Cup after losing to ES Setif in the Champions League qualifiers. They then faced FOSA Juniors in the Confed Cup playoffs and made it to the group stages.

So far, they have played four matches losing two to ASEC Mimosas and AS Vita on the road while winning once against Vita in Dormaa and drawing with Raja Casablanca at the same venue.

However, the mixed results have not left the Dormaahene despondent at all.

While meeting the team on Monday atÂ Abranpadease, his palace, he encouraged the players to keep working hard and strive for victory in their final two group games against ASEC (in Ghana) and Raja Casablanca (in Morocco).

“We, the playing body, are very happy for this. We are surprised by this and Nana has shown how committed he is to the team. There are no football activities in Ghana and so, we are relieved by this gesture.”

How will the money be shared?

According to Aduana Stars’ Communications Department, the players will split the money according to the number of matches each one has played in the continental so far.

When do Aduana Stars play again?

August 19 in Dormaa against ASEC Mimosas. They lost 1-0 in Abidjan in the first game of the group stages. Aduana Stars will play against Raja Casablanca on August 28 in Casablanca. They first leg ended 3-3 in Dormaa.

Sala’s body to be flown to Argentina for vigil