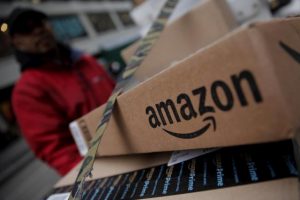 AmazonÂ posted a record profit of $2.5bn in the second quarter of 2018, thanks to strong performance by the retail giantâ€™s non-retail divisions â€“ advertising and cloud-computing, the company announced Thursday,

Amazonâ€™s shares were up more than 3% in after-hours trading. The stock price has increased more than 50% since the start of the year. With a market capitalization of $877bn, the Seattle-based company is squarely in the race with Apple and Alphabet to be the worldâ€™s first trillion-dollar company.

Revenue grew 39% year over year to $52.89bn, which was slightly below analyst expectations. But any disappointment was tempered by the profit result, which was an astounding 1,286% increase from the second quarter of 2017.

Olsavsky also pointed to the companyâ€™s advertising products as contributing to gross profit while â€œgrowing at a rapid clipâ€�.

Internationally, Amazon had an operating loss of $494m. Olsavsky noted that Amazon had improved margins in Europe and Japan but remains in â€œa period of investmentâ€� abroad, especially in India.

Amazonâ€™s resultsÂ announcementÂ drew attention to the extraordinary breadth of the companyâ€™s activities, from its 22 Emmy nominations for Amazon Prime Video original programming to its expansion of Prime benefits to shoppers at Whole Foods Markets.

â€œAs Prime members increasingly scan their mobile apps to get discounts, Amazon is collecting more data about consumersâ€™ grocery purchase habits,â€� said Patricia Orsini, an analyst for eMarketer. â€œThis will help Amazon not only to curate product selection in-store, but it will give them better insights into what online shoppers might buy.â€�

TheÂ increased cost of Amazon Prime, announced at the end of the last quarter, did not appear to damage subscription revenues, which grew 57% to $3.4bn.

Though Amazonâ€™s financial results and forecasts are decidedly more optimistic than Facebookâ€™s were, the company has not entirely evaded the increased political scrutiny currently facing the USâ€™s major technology companies.

Earlier on Thursday, the company was hit withÂ criticism from members of CongressÂ over AWSâ€™s sale of facial recognition tools to law enforcement agencies.

And both Amazon and Bezos remain a favorite target of Donald Trump, who most recentlyÂ threatened the companyÂ with an antitrust investigation on Monday.

Woman wakes to find three-foot long python in her bed