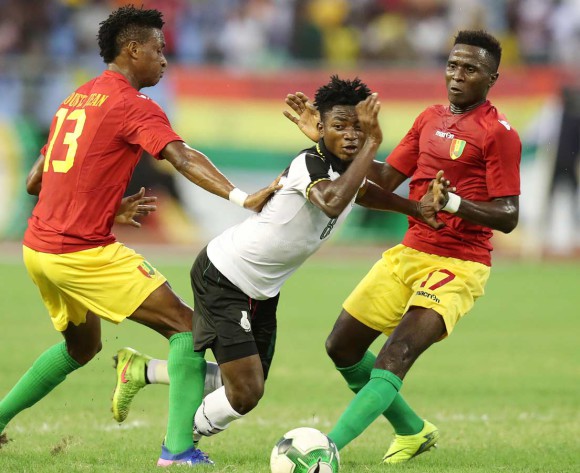 Gideon Waja in the thick of affairs for the Black Stars B.

Ghana coach Maxwell Konadu has not effected any change in his starting eleven for the Guinea clash, maintaining the same team for this afternoon’s clash with the Eagles of Mali.

Maxwell took a back step to make two changes in the team that played Gambia in the opening game of the competition, bringing on fans favourite Winful Cobbinah and Stephen Sarfo of Berekum Chelsea.

The Ghana gaffer has maintained the same line up for this afternoon’s clash with Mali in the second group game of fhe WAFU Championship.

Joseph Addo maintains his role in post while Amos Frimpong and Thomas Abbey continue their splendid performance at the full back positions.

Vincent Atinga still pairs Samuel Sarfo at the heart of defence following the absence of Musah Nuhu after sustaining injury in the first game against Gambia.

Isaac Twum and Emmanuel Lomotey maintain their holding role while Felix Addo and Winful Cobbinah operate from the flanks with Gideon Waja playing behind striker Stephen Sarfo to complete the line up.

Ghana are looking to keep their winning run to secure qualification to the semi finals of the tournament.

Below is the Starting XI for Ghana: