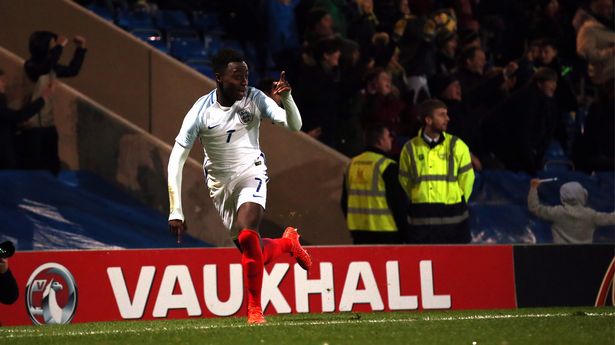 English-born Ghanaian youngster Arvin Appiah enjoyed a brilliant second half as England Under-17s came from 2-0 down to win 3-2 against Portugal in Chesterfield.

Appiah lit up the Proact Stadium as he made it 2-2 and then set up the winner as England kicked off a mini-tournament of friendly matches.

The hosts were two behind at the break after Eduardo Ribeiro capitalised on an awful back pass from Max Broughton in the 18th minute.

Rodrigo Fernandes got a disputed second after 35 minutes with keeper Harry Seaden convinced he saved the defender’s header before it crossed the line.

Backed by a young crowd of more than 4,000 fans, England came out strongly in the second half, with Appiah at the heart of their best work.

Portuguese skipper Umaro Embalo was booked for the foul on Appiah and he was off after 51 minutes for hauling down the Reds winger, who showed too much pace for his man.

Appiah then had a massive hand in the equaliser three minutes later as Thomas Tavares sliced Appiah’s cross into his own net. Appiah was officially credited with the goal, but that was generous

The highly rated Forest youngster then made the winner with three minutes to go. Having switched to the right wing, he fired in a low cross for Bobby Duncan to slide home.

Black Stars coach Kwesi Appiah: "10 out of the 16 newly invited players impressed me"