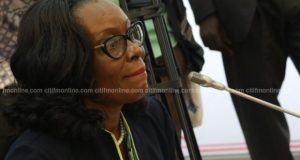 The suspended Chief Accountant at the Electoral Commission, Kwaku Agyei Larbi, has petitioned the Attorney General to recall him.

This he says will enable him to releaseÂ an amount of GHc360,000 to the EC as recommended by the Chief Justiceâ€™s Committee which investigated the petition to remove the Chairperson of the Electoral Commission, Charlotte Osei and two of her deputies from office.

According to the Chief Accountant, the amount was kept in a safe on behalf of the Commission in his office.

Speaking to Citi News, his lawyer, John Jery Asiedu, said they will make the money available as soon as he is allowed back to work.

â€œWe are demanding action because under the circumstance, the recommendation is that my client, the Chief Accountant should make available to the Commission a GHc360, 000 that he admitted. EOCO has since July 2017 asked my client to be on leave to allow for investigations to go on. Now the investigations have been concluded. The investigations were concluded somewhere January 2018, and weâ€™ve made several attempts to get him recalled from the leave but it has proved futile. Now, his inability to access the office is the reason he can’t make the funds available to the commission. We have to get EOCO to revoke its directive asking us to proceed on leave so that we can resume work and make the funds available to the commission.”

President Akufo-Addo on June 28, 2018 removed the Chairperson of the Electoral Commission, Charlotte Osei and her two deputies â€“ Amadu Sulley and Georgina Opoku Amankwa â€“ from office upon the recommendation of a committee set up by the Chief Justice, Justice Sophia Akuffo, pursuant to Article 146(4) of the Constitution, to investigate separate complaints brought by some Ghanaian citizens.

Charlotte Osei was accused of various procurement breaches, whiles the deputies were also found guilty of same offenses as well as financial malfeasance.

Although government spokespersons have justified the move, some members of the opposition have challenged it.

Prior to their removal, Georgina Opoku Amankwa, the ECâ€™s Chief Accountant, Kwaku Owusu Agyei-Larbi and Finance Officer, Joseph Kwaku Asamoah, were being investigated by EOCO over an amount of money which went missing from the ECâ€™s Endowment Fund.

Mr. Owusu Agyei-Larbiâ€™s petition to the Attorney General from his lawyers said their client is â€œready and willingâ€� to return to his office to give back the money to the Electoral Commission.

â€œOur client wishes to state categorically that the amount of money was only brought into his office for safe keeping by the Assistant Director of Electoral Service because it is only our client’s office that has a secured safe at the Commission. The disbursement or purposes of the funds are solely known to the said Assistant Director of Electoral Services.â€�

â€œOur client has continually stated that if EOCO were to revoke its directive that he should proceed on leave, our client was ready and very willing to go back into his office and make the said amount of money deposited in his care available to the commission,â€� lawyers for Mr. Agyei-Larbi added in the petition.

Click here for the full petition to the Attorney General