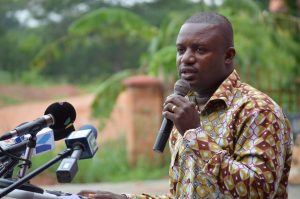 Under the new agreement, a new company – Mytilineous International Trading Company – will take over the management of the AMERI power plant for 15 years.

The new company has offered to pay AMERI an amount of $52,160,560, with government paying the remaining $39 million to the Dubai-based AMERI Energy to wash its hands off the deal entirely.

The agreement covering the new deal was laid before Parliament on Thursday for approval.

Aside raising issues with value for money,Â Mr. Jinapor on Eyewitness NewsÂ also slammed government for failing to do due diligence in amending the deal before laying it before the law making house.

â€œThe amendment is in two parts; there is a legal aspect. The Public Financial Management Act 921 requires that for such agreements, the Minister of Finance must give a written approval. Any agreement that government goes into that spans one fiscal year, the Minister of Finance must write to Parliament informing us. That was not done. Article 106 of the constitution stipulates that the Attorney General must give a legal opinion, that was not part of it. For such a structure, the PURCÂ  must also approve the current structure but that was not done.

â€œFinally there must be due diligence or value for money audit to determine whether what the Minister is talking about is cogent within the financial framework. That was also not done. . The memo was rushed. It was signed by only the Minister of Energyâ€¦ This is the worst deal I have ever seen and I cannot believe the Minister brought this. This so called negotiation is moot and dead on arrival.They did not give reasons for failing to meet these requirements. It could be due to super incompetence, a lack of understanding of the Ameri deal or negligence, but when you look at what they have done so far it could be due to a combination of the three.”

Mr. Jinapor’s comments are in sync with theÂ Executive Director of the Africa Centre for Energy Policy (ACEP), Bernard Boakye, who asked Parliament to reject the renegotiated AMERI deal.

Mr. Boakye on Eyewitness News on Thursday rubbished claims Ghana will be saved a whooping $400 million under the renegotiated deal, saying â€œWe are committing to pay $50m for 15 years which is not on for the Ghanaian public and I hope Parliament will protect the public by rejecting the AMERI amendment,â€� Mr. Boakye said.

In his view, the renegotiated deal is worse than the previous deal under the Mahama administration.

About the Ameri deal

The then opposition NPP was critical of the deal, and the Energy Minister, Boakye Agarko, claimed that it had been overpriced by 150 million dollars.

The NPP MP for Andasi-Asokwa, K.T.Hammond had earlier filed a motion for a rescission of the deal.

The Minority however staged a walkout when the Speaker forwarded the motion to have the deal rescinded in Parliament.

How calls for renegotiation started

The John Mahama administration in 2015 signed a contract with Africa and Middle East Resources Investment Groupâ€™s (AMERI Energy) to rent the 300MW of emergency power generator from AMERI at the peak of the countryâ€™s power crisis.

But according to the NPP administration, it found out that the government had been shortchanged by AMERI as they presented an overpriced budget, and were overpaid by $150 million.

The new administration thus commenced a renegotiation process to ensure value for money. But the NDC has repeatedly stated that the claims are untrue.

The Africa & Middle East Resources Investment Group LLC (AMERI) has also stated that, its 2015 agreement with Ghana for the provision of a Power Plant in the heat of the countryâ€™s power crisis, offered the â€œbest value for moneyâ€� despite government findings that the $510 million deal was bloated by $150 million.

â€œAMERI acknowledges that the Government of Ghana has every right to assess all public contracts for value of money or quality of delivery. The company strongly believes the project delivered on both. An independent report by renowned auditors PriceWaterhouse Coopers (PwC) found that, out of 7 similar projects, the Ameri plant at Takoradi offered the best value for money,â€� the statement said.

The post ‘Renegotiated Ameri deal the worst I have seen ‘- Jinapor appeared first on Citi Newsroom.

Black Queens to camp in Prampram from August 2